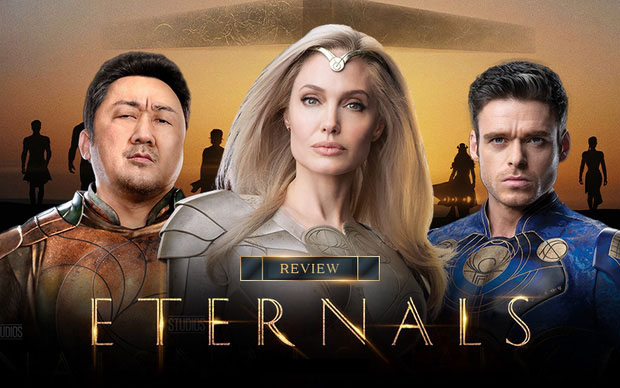 The article reveals a part of the movie Eternals

Eternals is a big surprise this year in the Marvel Cinematic Universe (MCU). The work has a star-studded cast including Angelina Jolie, Richard Madden, Ma Dong Seok, Kit Harington and Oscar-winning director Chloé Zhao. However, the film was criticized by Hollywood and made the audience controversial for many factors. As it turned out, the criticisms above were valid because of Chloé Zhao's ambition and somewhat out-of-the-ordinary style.

The Eternals content revolves around the immortal race of Eternals sent by the Celestials to protect the Earth to protect humanity from the evil Deviant since 5,000 BC. Over the next millennia, Ajak (Salma Hayek), Sersi (Gemma Chan), Ikaris (Richard Madden), Gilgamesh (Ma Dong Seok), Thena (Angelina Jolie), Sprite (Lia McHugh), Makkari (Lauren Ridloff), Druig (Barry Keoghan), Phastos (Brian Tyree Henry) and Kingo (Kumail Nanjiani) together wipe out the enemy. They also create technologies, exploit the land to help people develop. Up to the present time, for some reason, the Eternals members are no longer together. The Hulk/Bruce Banner (Mark Ruffalo) snap that brought half the population back also brought Deviant back to life. Sersi and her boyfriend Dane Whitman (Kit Harington) and Sprite were living in hiding in London (UK) when they were attacked. Ikaris appears in time to rescue, and suggests gathering everyone so they can fight.
Eternals is one of Marvel Studios' longest films with a length of up to 157 minutes. Director Chloé Zhao aspires to tell the story of the 7,000-year history of the immortal race as well as unlocking many secrets about the origin of the universe. However, what the audience received was just a lengthy, lengthy and emotionless work. Introducing 10 new characters at the same time makes it difficult when it is not possible to clearly express each person's own story and feelings.
The film tells two parallel timelines between the present and the past to explain why their relationship changed. This is the weakest point of Eternals. Because the time spent on each character is too short, the audience has never felt attached to the characters. The journey of 7,000 years, expressed in just a few short slices, is not enough to bring the necessary weight. Before that shaky foundation, what Chloé Zhao grew up was very precarious and easily collapsed.
That's why when someone dies, they only see the rest of the members crying and mourning, but they can't empathize. The movie talks too much about the love between the Eternals but doesn't show it. Even contradictions only appear on the surface. In the end, the film crammed too much information about the origin of Deviant and Eternals, the birth of Celestial but failed to show the difference of Earth that caused Sersi and his teammates to change.
Perhaps the most interesting point of Eternals is the fact that Chloé Zhao skillfully integrates myths and pop culture icons. Sprite is a character who has a knack for drawing stories and illusions. Therefore, she relied on her teammates to tell legends about the Mesopotamian hero Gilgamesh, the Greek goddess of war Athena, the Excalibur, Superman and Batman or even the Peter Pan - Wendy - relationship - Tinker Bell.

With so much content and tight time, it's hard for Eternals to fully build the characters. Despite living for thousands of years on Earth, the Eternals are too naive for life. The film ignores an important detail that is the Eternals' love for people or how they will feel when they see their loved ones die one after another over the past thousands of years.
The characters then fail to see the depth needed for each of their decisions. Ajak can't figure out why, after millions of years, she's more attached to Earth than to other planets. Sersi, Makkari, Druig also used the reason of "loving humanity" to explain actions that go against the rules of nature and prevent the birth of countless other planets. In the end, most of the film is just arguments with many meaningless and cliched morals.
More important things like Sersi's love story are just too bland. She should have been the one forced to choose between duty and love, just like Ikaris and Dane. But the audience only saw Gemma Chan confused and waiting to burst into tears throughout the movie. In the end, Richard Madden must be the one to take the responsibility of expressing the inner struggle on behalf of the heroine.
The villain Kro (Bill Skarsgård) in the film is extremely blurred and unnecessary. The most interesting storyline probably belongs to Gilgamesh and Thena. The combination of Ma Dong Seok and Angelina Jolie leaves a lot of emotions when a person accepts his life is always in danger for thousands of years just to make the other happy.

Action and techniques are the highlight