Cynicism is the idea of a whole school of philosophy. The name comes from the Greek word "kynikos", which means "dog breed".
Oscar Wilde once said a cynic is one who knows the price of everything but the value of nothing...
This is a maxim that clearly shows the psychology of the type of person who turns good things related to aesthetics, morality, knowledge, even family life or daily joy... into trivial business. but still believe that they are very knowledgeable and experienced people. 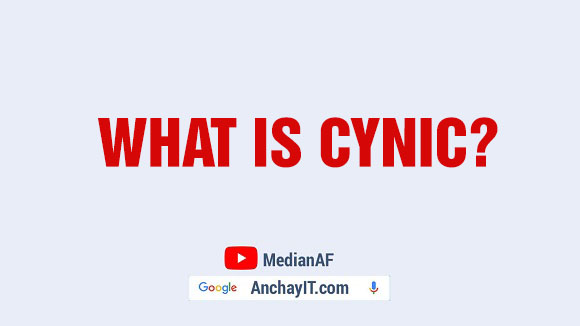 To better understand this way of thinking, we have to go back to the ancient Greeks again - a people who were extremely innovative in creating new thinking and ways of life.
"Cyssism" is the idea of ​​a whole school of philosophy. The name comes from the Greek word "kynikos", which means "dog breed". The name of thisism has a somewhat troubled history. The first "cynic" philosopher, Antisthenes (circa 445-365 BC), taught his philosophy at the stadium Cynorcarges (meaning "place of the white dog") in Athens.
Another important reason, however, is that the ancient Greek cynics roamed the streets and tended to be critical - or more commonplace: "you'll bite everywhere".
In Western history, they are known for this repulsive hobby and it is also why they are like modern cynics: people who see other people's behavior from a very realistic perspective, see this person's ideals. false, one's conventions are absurd, the other's fashion is ridiculous without bothering to hide his disdain.
As one writer at the same time very vividly describes the forefather of the Diogenes school:
"He was unique in his disparagement of his countrymen. He called Plato's lectures futile, Dionysia's performances a kind of public spectacle for the ignorant, and demagogue politicians are minions of thugs...
He said that when he saw fortune tellers interpreting dreams, or people proudly showing off their wealth, he immediately thought that humans were the most ridiculous animals. He also said that in order for people to behave properly, either use reason or use ropes to tie people's necks like horses."
But there is an implicit difference between Diogenes and modern cynics in this passage, expressed in just one word: reason.
Classical cynics may be like Wilde and Vu Trong Phung's satirical subjects in that they don't close their eyes to every foolish act, don't shut their mouths to the big words of others, but they differ in that they don't think HAVING THE IDEAL IS REQUIRED TO SHUT YOUR EYES and they definitely don't use their disillusionment for self-interest.
There are two values ​​they still maintain, even in their speech and actions, which are naturalness and (as said) reason. To live naturally according to the teachings of the classical cynics is to resist the artificial constraints of society, to waive possessions, to discard unnecessary formality and formality.
Diogenes is famous for living on the street in a barrel to demonstrate his patience to adapt to a minimalist life, and his contempt for materialistic people, seeing that person's way of life is too poor, how to dress. His is too hard to see.
To live according to reason is to live beyond the influence of obsessions and superstitions that have the power to dominate people's lives. Both Diogenes and his teacher Antisthenes were determined to resist the religious lightheadedness of the times in which they lived.
In order to persuade Antisthenes to join a prestigious religious secret society, the sect's priest hinted that someone knowledgeable about the secret ritual would enjoy much in the next life. Antisthenes' reply was terse: "Then why don't you die at once?".
#Meaning